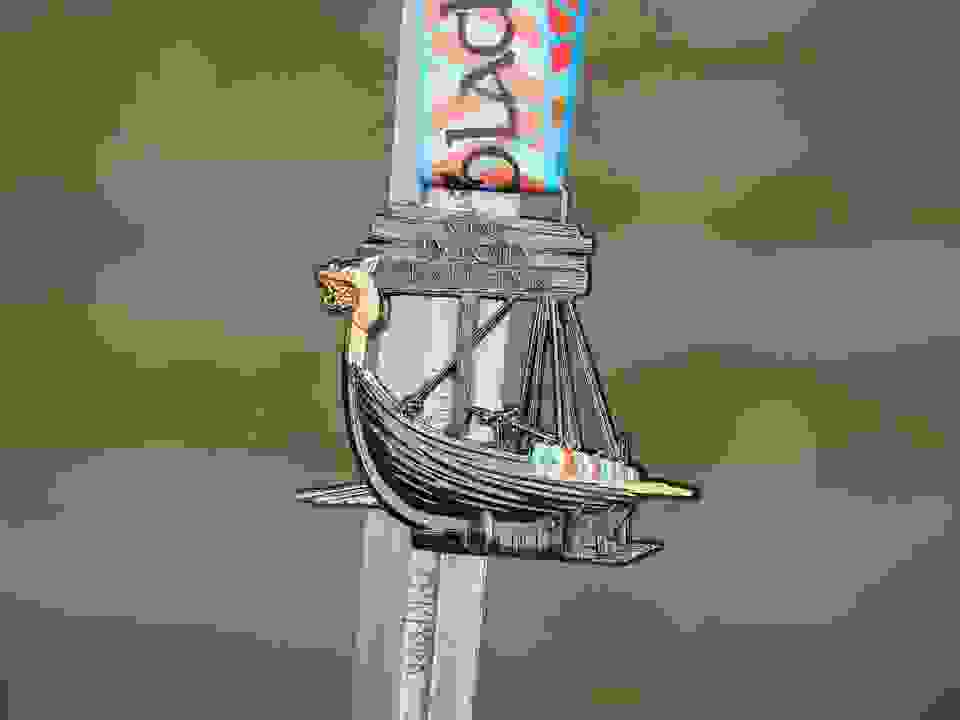 So after all the months and months of planning the inaugural Runbelievable event was upon us.

Etch Saturday 12th September 2020 down in your cerebrum as an ‘I was there’ moment – if you were there of course!

What made us pick the Black Hugin event I here you ask? Well running around the iconic Hugin Viking ship at night with a bunch of like minded loons pretty much pushed all of our buttons especially after we had missed it last year as we were away on holiday.

Alas, the ‘C’ word put paid to the hard worked plans of Simon and Kim as it has done to many plans we had all made in 2020.

Not to be downhearted, Simon and Kim conjured up an alternative location and adjusted start time so the Black Hugin could go ahead….out went the head torch and in came the sun glasses!

Donna and I have been members of Coastal Striders for around 1 and half years but this is the first time we have entered such an event and not really knowing what to pack to ensure we lasted the potential 6 hours of running time, the local supermarket was pillaged late Friday evening  in true Viking fashion and we rocked up to Betteshanger with 2 cool boxes full of food and drink to provide sustenance for the day.

Little did we appreciate that the ‘goody’ bag would be so plentiful and make the Tesco plunder a waste of time. All I can say is if the Easter bunny requires restocking he needs to visit Simon and Kim’s place for supplies!

Once everyone had checked in with the fantastic registrars Amy and Sophie it was a very chilled out start to an event with everyone socialising….at a distance of course!

None of the ‘Go on my whistle’ or to the sound of a starting pistol which is all I had ever known from running in my plimsoles at school through to running Brighton marathon a couple of years ago.

One by one we all took our place at the sword start and when we were ready to go, the 6 hour timer started.

As both Donna and I had never run one of these events before we decided to take different strategies. Somewhat fortuitously, this event coincided with my 100th half marathon of 2020 and I planned to go out hard to get that distance out of the way ( about 3 laps of the course) before a quick stop to refuel and then go back out again at a steady plod.

Donna’s plan was to get her furthest distance at a comfortable pace. Now Donna’s furthest distance prior to the Black Hugin was 14 miles so her goal was going to be seriously under threat, little did we know how much she would smash it by!

So onto the course…4.7 mile laps featuring a varied terrain and surfaces including what were described as slopes by the race directors but in essence were small mountains in my eyes especially after doing them a number of times! I even managed to extend one or two of the laps by getting lost, trust me!

There were runners of all abilities and due to the nature of the laps, we were able to say ‘Hi’ and ‘Keep going’ and issue words of encouragement to each other all the way around which was definitely a highlight for us.

The Striders orange shirts were out in force and each and every one of them hit their goals or completely smashed them on a very hot day with some truly inspirational achievements.

Donna completed 5 laps reaching 23.5 miles and was determined to complete her first ever marathon distance so started out to add the 2.7 miles on only to be ‘encouraged’ by Darren to do a full lap and become an ‘Ultra’. It was fantastic to go back out onto the course and run the last few hundred metres with her.

As for me, the 100th half was in the bag and I topped it up to 29 miles my furthest distance I’d ever run too.

The usual ‘I’m never running that far again’ comments could be heard amongst some of the finishers including ourselves but on the drive home the inevitable ‘It was fun though wasn’t it, we should do it again’ words were whispered and so we find ourselves all ready to go again in December for another of the Runbelieveable events!!

I would like to thank Simon, Kim, Amy and Sophie for putting on a great event that each and every participant appreciated and enjoyed.

I’d also like to thank the David Baileys’ we had on course that gave up their time to take some brilliant photos of our pain…Sophia Joy, Austin Bourlet and David Gethin.

Well done to everyone who took part, we hope you enjoyed the day as much as we did!

Thanks you for a fab weekend at Ashdown! Won't blame you for the weather but brilliantly organised run, well signposted, fab medal and goody bag but brilliant welcome for my first run with and lovely seeing all your family involved. So encouraging and supportive. Look forward to my next run with you in a couple of weeks! Thank you so much x